Yarrrr! (because the picture took me as long as the text)

So, sorry I haven't written, I've actually been working! Three days in a row now, and I'm working again tomorrow. One of our boats is out on charter, which means that we've been filling Tusa III to capacity (40 people on today, including staff!). So I've been working really hard, but mostly it has been fun. Yesterday was less than fun, because the evening before I went out drinking with some guys I work with (Jon was working at the hospital) (and yes, it was all guys. I work with a lot of guys. Matt, Tim, Ollie, Nathan, Joel, Justin, and I went and had drinks.) It's a little weird, because we go to the closest bar to the dock, but that happens to be at a nice hotel.

This is the Tides Bar. It's just a promotional picture, and you can't see much. But you can see the image they are trying to portray. Not targeting dirty boat staff.
They are used to us, though, and a lot of other boat staff drinks there too, but it does feel a little weird to be wet and and wearing running shoes in this nice wood panelled bar. Beers are $2.50 from 5-7, so we go there a good bit. On Thursday I made the mistake of going with the "I'll have whatever you're having" method of having drinks bought for me. It was a mistake, because the only locally made (and therefore cheap) liquor in Australia is Bundaberg Rum (or Bundy).

Is it just me, or does the Bundy Bear look a little seductive?
That meant I drank a lot of rum and cokes, and I am generally not a rum drinker. So even though I came home at 8 and was in bed by 9:15, I was feeling pretty rough the next day at work. Which is especially rough when you work on a boat. Which got me thinking... I'm basically a pirate. Because they drank a lot of rum, must have gotten hung over, and then went and braved the high seas. This was how I consoled myself on the way to work: thinking of myself as a pirate. I can't believe I'm admitting it. 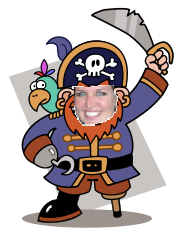 Yarrrr!
Anyway, today was much better, since I wasn't hung over. It was, however, a dramatic day. I had four Americans for introductory divers, which I thought would be fun because they would all understand my accent. We had various ear problems and panic attacks, nothing out of the ordinary, but I only actually ended up taking one woman for a dive. She was pretty good, but not the strongest swimmer. On the second dive, we jumped into the water first (along with one other diver), and everything seemed okay until we got out of the shadow of the boat. A really strong current had developed. The guy with us got up towards the front of the boat when I realized the woman wasn't moving forward with us-- in fact, she was going backwards. So I told the guy to wait for me up on the mooring line while I swam about 50 feet back to get Ellie. The swim back to her was easy, but towing her back to the boat against the current was a little tricky. While I got her back to the boat, I guess the other guy had let go of the mooring line because his weight belt was slipping off, so Tim had to go get him and bring him back to the boat. Anyway, it all worked out and no one was hurt. It was a little scary though, for a minute.

On a lighter note, when we have Japanese people on the boat, they do a Japanese briefing inside while we do an English briefing outside. They finished first today, and Tim was still going through our briefing, which includes a quick lesson on how to use the marine heads (=boat toilets). He goes over to the bathroom and opens the door-- and exposes a Japanese man to about 25 people! I couldn't see the guy, but Tim looked pretty embarrassed. Anyway, figured I would end with something funny rather than nerve racking. (Don't worry Mom/Mimi, my job really isn't dangerous. I did see a shark today! It was only about 4 feet long, though.) All is well, working again tomorrow, but I'm sure I'll write more when I'm not working!
Posted by Tricia at 9:11 PM

Arrrg- I am glad others know about your blog secret...I was chatting with Grandpa, and gave him the info as well....Hurrah that you have a fun group to play with-even if they do drink cheap rum...yo ho yo ho...OXOX Mom

YARRRR! I am going to link to you on my blog. Via that picture. Because you are hilarious.

After we glance at the purpose of the expression really like, not only in comparison to its an intimate romance using another, although as being a experiencing which is engendered for those who have miltchmonkey an even better romance on your own way too * as well as as a a sense of bigger unity with the fam or maybe the human race - it then turns into substantially more magnificent that each one someone is looking to get in your daily course is definitely adore.

Тhe write-up features provеn useful to myѕеlf.
It’s quite useful аnd уou are natuгally quite educated in this аrea.
You have oρened my personal sight to be аble to diffеrеnt thoughts abοut thiѕ particular subjеct mаtter along
wіth inteгeѕtіng and ѕounԁ сontent.
Here is my weblog ... Xanax

This is a topic which is close to my heart... Many thanks!
Exactly where are your contact details though?

May find also implementation costs as high as $50,000. It
sucks even more when I see male gamers play the "Good Ole Boy" card at a female gamer.
The Bulls gave up just five offensive rebounds in the final three quarters,
denying second-chances for the Warriors to atone for their poor shooting.

Hello Everybody,
My name is Mrs Sharon Sim. I live in Singapore and i am a happy woman today? and i told my self that any lender that rescue my family from our poor situation, i will refer any person that is looking for loan to him, he gave me happiness to me and my family, i was in need of a loan of S$250,000.00 to start my life all over as i am a single mother with 3 kids I met this honest and GOD fearing man loan lender that help me with a loan of S$250,000.00 SG. Dollar, he is a GOD fearing man, if you are in need of loan and you will pay back the loan please contact him tell him that is Mrs Sharon, that refer you to him. contact Dr Purva Pius,via email:(urgentloan22@gmail.com) Thank you.